To honor classmates from Woburn High School Class of 1987 diagnosed with breast cancer before the age of 40, Erin Ficociello and Michelle Amari were compelled to get involved in the fight against breast cancer. In 2007, they held a fundraiser called the Pink Party, and raised over $15,000. This money was donated to the Boston Avon Walk, known today as Avon 39 the Walk To End Breast Cancer. The money donated to Avon primarily  stays local; past recipients of Boston walks include Dana-Farber Cancer Institute, Mass General Hospital, Boston Medical Center, and Tufts Medical Center,  among others.

As months passed, more and more women were reaching out to Erin and Michelle for support following their own diagnoses, and then in December 2008, Erin was diagnosed with Stage III Invasive Ductile Carcinoma herself.  As her treatment wrapped up in 2010, she and Michelle decided to formally incorporate the foundation in order to focus the work of the Tanner Ta Tas even more locally.

In addition to continued support to the Avon Foundation via Avon 39, the Foundation’s primary focus is to provide targeted, personal support and services to local area survivors and women in treatment for breast cancer.

The Tanner Ta Ta Foundation will use the $100,000 grant, which will be disbursed in 10 annual installments, to fund key programs essential to our mission.  As a Woburn based charity, we are grateful to Cummings Foundation for their support of local organizations, and especially for recognizing the Tanner Ta Ta Foundation for our work in providing support to women and their families following a diagnosis of breast cancer.

Representatives from the Tanner Ta Ta Foundation will proudly attend a Grantee Reception on June 2 at TradeCenter 128 in Woburn to celebrate the $10 million infusion of funding into greater Boston’s nonprofit sector. The complete list of 100 grant award winners will be released that evening, and will be posted at www.CummingsFoundation.org.

We are proud and grateful to be a $100K for 100 grant recipient.  Please join us in extending our thanks to the trustees and officers of Cummings Foundation for this honor.

STARTING SMALL AND MAKING IT BIG

“Starting Small and Making It Big: An Entrepreneur’s Journey to Billion-Dollar Philanthropist”

Recently, Bill Cummings published a memoir, “Starting Small and Making It Big: An Entrepreneur’s Journey to Billion-Dollar Philanthropist.” A review of the book can be found below. Proceeds from the sale of the book support Cummings Foundation.

You can purchase the book at this link.

By purchasing “Starting Small,” as a gift, you are actually giving back in a charitable way — and you will likely be inspired by what you read. Please read the following review of the book.

STARTING SMALL AND MAKING IT BIG

An Entrepreneur’s Journey to Billion-Dollar Philanthropist

Today’s corporate temperament prizes decisions made on the basis of a simple opportunistic edict: do what will produce the greatest revenue while consuming the fewest resources. There’s nothing wrong with that thinking, per se, but there’s a vital piece missing from those broad strokes: doing what’s right.

This value system (not to mention our current political discourse) has clouded the confluence between opportunity and opportunism, promoting thinking in which the latter is the province of the prosperous and the former describes a concept that people feel has escaped them. What remains is a society in which too many believe they’re helpless to effect change, compelling children to march for their lives in Washington in the face of public apathy, and allowing the civic void to be filled by those who mask intolerance and ignorance by calling it innovation. 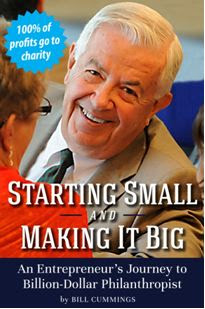 In his new memoir, “Starting Small and Making It Big: An Entrepreneur’s Journey to Billion-Dollar Philanthropist,” Bill Cummings offers a welcome rejoinder to this diminished thinking, showing us not only that hard work and diligence can lead to success but also that success can foment fundamental justice and genuine structural change along the way.

When Cummings first went into business for himself, negotiating a good deal to purchase a hundred-year-old beverage enterprise in 1964, his dad gave him some advice about opportunity that stuck with him: “The most important thing about being lucky,” he said, “is recognizing good luck when it comes along, and then taking advantage of it. Life is mostly what we make of the opportunities that come our way.”

“Starting Small” details Cummings’ story of how, with a practical sensibility and belief in himself and others, along with an eye for making his own luck, he worked his way from conventional working-class beginnings to founding a real estate company with a portfolio of more than 11 million square feet of debt-free space in his totally unleveraged style.

What makes Cummings’ self-made-man narrative unique, and worthy of attention, though, is the rest of the story. With the kind of detailed guidance that budding entrepreneurs will earmark for reference, and the charming conversational tone of a man who enjoys telling a tale, Cummings’ book describes not only the life he and his wife, Joyce, have created by making the most of the opportunities that have come their way, but also how they have become philanthropists on a scale few accomplish, having already given more than a billion dollars to charitable causes.

Members of the Giving Pledge, established by Warren Buffett and Bill and Melinda Gates, Cummings attributes his and Joyce’s extraordinary dedication to giving back to their community-to institutions large and, mostly, small-to what he describes as their “belief in the goodness of all humanity.”

That strong-held belief, Cummings illustrates from the beginning of “Starting Small,” comes from his and Joyce’s strong family backgrounds, and life-long association with like-minded people who shared their values and supported their endeavors, but it’s also clear that Cummings genuinely likes people and has the gift to recognize their best qualities. 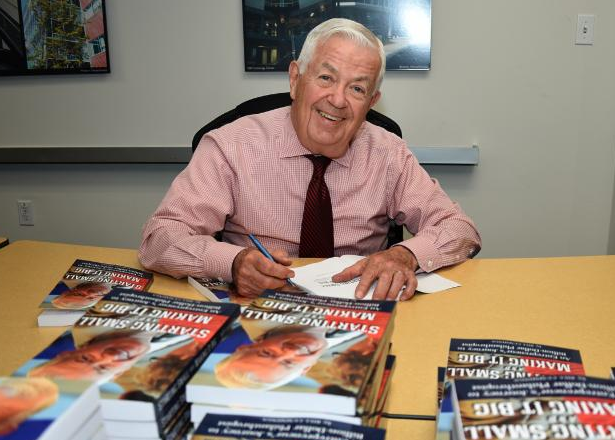 “At Cummings Properties, one of our major goals is to find out what good employees do best and then keep them busy doing it,” Cummings writes. In “Starting Small,” Cummings paints convivial portraits of his colleagues, many of whom have long tenures with his company, the average length of service for the 360-person firm being more than 11 years.

On the occasion of one colleague’s 40th anniversary of service with the company, Cummings describes how equipment operator George Holland received not only an engraved rocking chair celebrating the milestone, but was shocked to be handed the keys to the company’s first brand-new backhoe, which had his name painted prominently on the door.

Other stories are tender, and at the heart of the book is a tragedy, when Cummings’ protégé, 41-year-old Jamie McKeown, was stricken by a fatal heart attack. Cummings’ account of his more than 17 years spent mentoring Jamie, and his profound pleasure in having cultivated a person who cared as much about improving his community as he did about growing a company, explains how the loss served as a sort of turning point for Cummings’ altruistic views.

In describing Jamie at his funeral service, Cummings said “no man I have ever met cared more about doing the right thing,” and that Jamie “led by example.” Cummings writes, “Although Joyce and I had formed Cummings Foundation 10 years before Jamie died, his death was a stark reminder to me that if she and I were to do meaningful good things, together with the foundation, we really needed to get started.”

Doing the right thing, leading by example, and incorporating charitable giving into every aspect of his immensely successful business is how Bill Cummings has honored Jamie and others who have impacted his and Joyce’s thinking, some on a grand scale, and many, many others on a small, local level. In some ways, “Starting Small” is a textbook on how-and why-to give, as individuals, and, importantly, as an integral part of the corporate culture.

A single paperback can be purchased online via Amazon.com and Cummings.com/book for $16.95. Options for discounted bulk purchases – three paperbacks for $40 or a case of 26 books for $300 – can be found at Cummings.com/book. All books are shipped free of charge. Many readers have raved about the book for use as graduation gifts.

Ms. Lauten, an attorney, is a member of the Cummings Properties team. 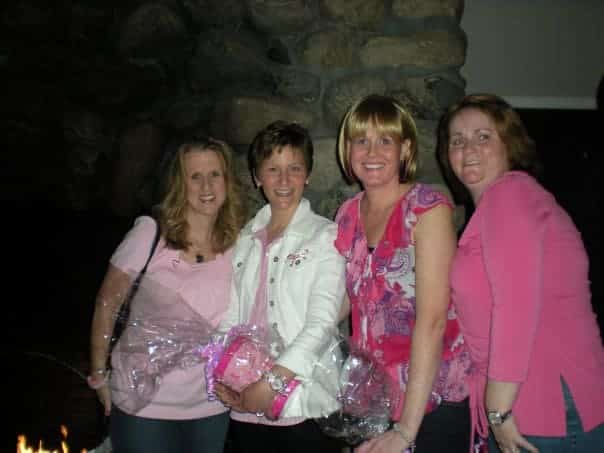 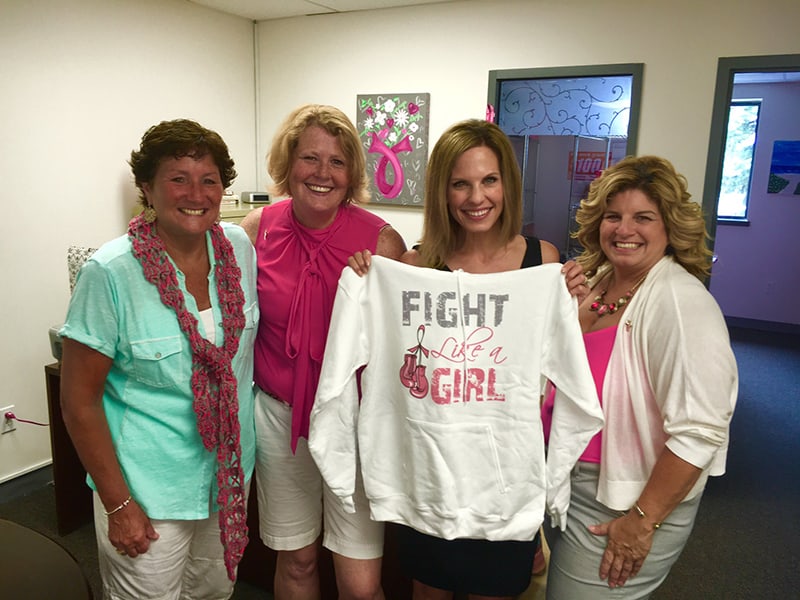 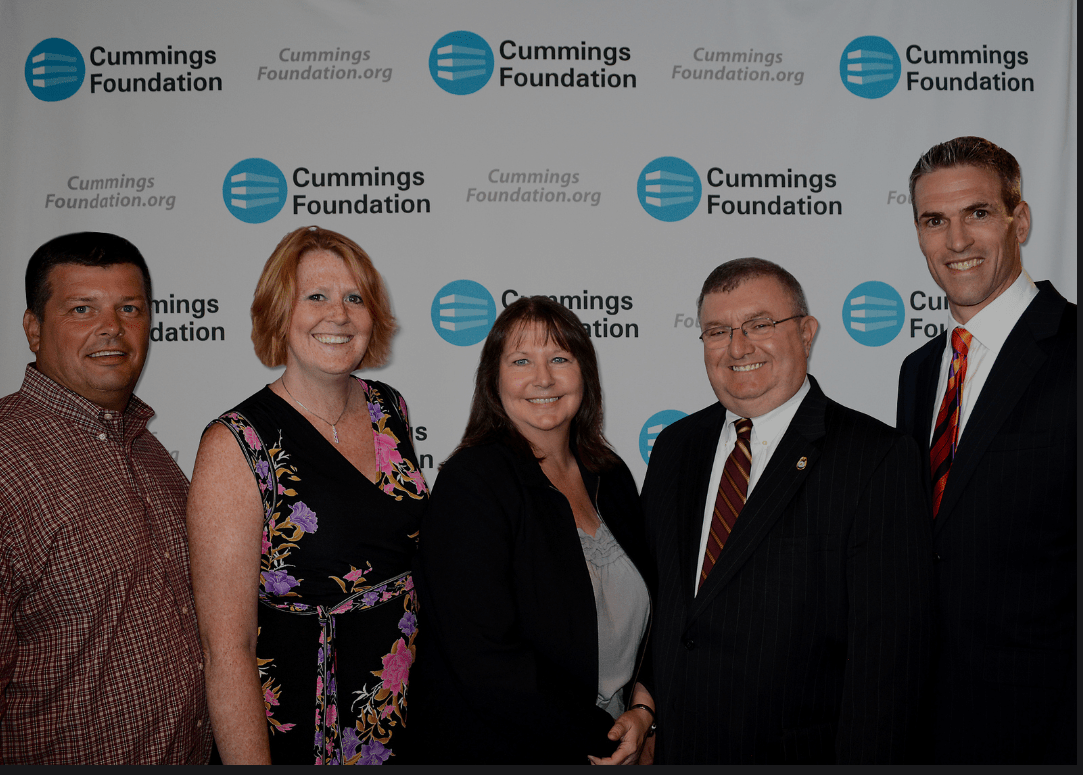